4 Mums on Flying With Babies

Share
Worse than snakes on a plane? These parents share their experience of longhaul flights with little kids.

Flights out of Australia are, by the rest of the world’s standards, pretty brutal. We’re big, and we’re far (but our beaches are chef’s kiss). Getting out with a baby in-tow can make the former flights look luxurious, but it’s not always what you expect. So we spoke to three mums about their experience of baby’s on a plane. The good news, for 99.9% of trips with babies, the pain is totally worth the reward.

Mirte and Alfie, 17-months, Melbourne to The Netherlands

The plan My husband and I were flying together with our son to go see my family in The Netherlands. We were expecting hell on earth, but figured, it will be shit, but we’ll just get through it. Even though we didn’t have to (as he was under 2), we booked an extra seat for him. It’s an extra expense, but if you can, it’s a life saver. That way he could just sit next to us. Yes, he did end up sleeping on us a few times but because of the extra seat I could lie down with him which made all the difference. We flew there at night, so the whole flight to Europe was mostly in the dark which made it very “easy” for his sleep.

The on-flight crew We took the lot. The carrier was ideal for getting him on and off the plane, standing in line and calming him down during the flight. The yoyo stroller was perfect for the five-hour stopovers in Singapore. On the flight, we had heaps of snacks and downloaded lots of shows he could watch with his own headphones. Up until then, he hardly watched TV but for the flights we threw all our “rules” out the window. He could watch as much as he wanted! We also took some toys, books and a busy board. But we didn’t bring them on the way back as he wasn’t that interested.

The takeaways In terms of jet-lag, Australia to Europe is pretty doable. We were pleasantly surprised. It was a breeze! However, flying home, it was constant daylight which made it incredibly hard for him to fall asleep. And as we all know, once they are overtired, forget about it. Then, the jetlag was brutal! A friend had already done the trip and warned me, but I had not appreciated just how intense it would be. It took us 10 days back home to find some form of rhythm again but it was intense. So, if you can, have some extra days off once your home to help ease them back in.

The plan My husband had been working in the middle east for two months and we had an opportunity to go and be with him for a two-week holiday. It meant I flew with August, solo, to Dubai where I’d meet up with my husband, stay the night there and then fly all-together to Rome, and then a few days later to Sicily. I used a travel agent to book everything as there were so many moving parts and at her recommendation, we were on a Wednesday, 10am flight which was relatively empty. Not only did I have the bassinet seat, but a whole row to ourselves. We were definitely in a “family” zone as the people on the rows beside and behind me also had families, which really made me feel like we were all in it together, particularly as I was flying by myself for the most part.

The on-flight crew August had not started solids on the way there, so he was all milk and I just breastfed him often. For food, for comfort, for popping ears - I fed. I wore a button shirt that made it easy to do so, and a cardigan over-the-top for if I got cold. I also had a bottle and portioned formula as backup, two dummies, nappies, wipes, a muslin wrap, four changes of zip-suits and singlets, a teething toy and a sensory book. My 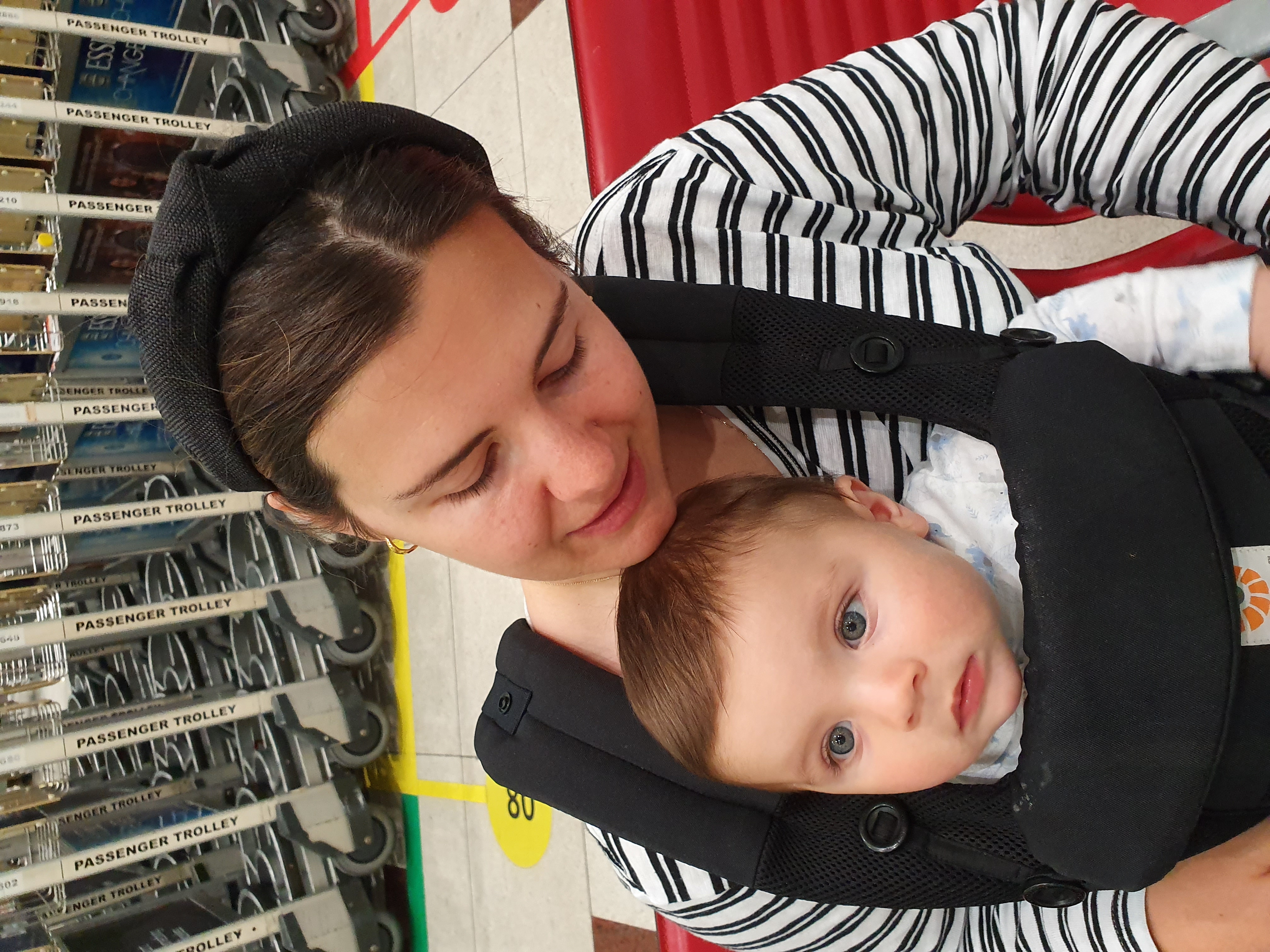 bigger kit included a blackout cover for the bassinet but 1) he was almost too big for it. 2) The cover didn’t fit great. 3) I then couldn’t see him so kept getting up to check. Flying by myself, I thought a lot about my set-up. Pram or no pram. I decided on pram, and it was actually the easiest part. I rolled through the airport and right up to the gate where they took my pram - I’d transfer August to the ergobaby carrier - then I’d get the pram back as soon as I stepped off the plane. For take-off and landing, I couldn’t use the carrier, he had to be held on my lap, but on the flight, he could be in it as long as the seatbelt sign was off. This allowed us both to get a bit of rest, but if I’m honest, I didn’t really sleep on those solo flights, which is why the Dubai overnight stop-over was crucial. The air hosts were incredible for me. So helpful if I needed something from my bag, they would hold him so I could get sorted or readjusted or even go to the bathroom. Similarly for the passengers around me. On my flight back, I was pretty emotional (it meant another 4 months ‘til I’d see my husband), and August had started on solids while we were away and was insatiable! He was grabbing everything on my plate. A Danish backpacker was across the aisle from me and said, “You haven’t eaten anything all flight, give him to me, you don’t have to do it all alone, we all have time to play with him.” I know, this was a pre-COVID world, and it might not be the same now, but that kindness did so much for me. August was constantly gazing at people and they would stop and make faces at him to keep him busy. It felt like my on-flight village.

Taking a holiday that required a third and fourth flight with a baby (Rome to Sicily and back) was maybe a bit too much, doing it again, we’d maybe stay somewhere with the international airport, or just drive from there. The stop-over was essential, and I had my parents stay with me at Sydney airport the night before and pick me up from the airport. When you have to collect your luggage, pop the baby in the carrier and put everything else on the luggage trolley (including the folded-up pram), then push. Finally, going to Europe, the jetlag worked so that August fell asleep in the early evening for his long sleep. We’d push him to dinner in the pram, he’d fall asleep, and stay that way while we ate a lovely long dinner. He’d wake up early in the morning, but that’s when we’d go see the sights, before anyone else was around.

To take Miller to and see my family in the UK. My partner had to work, so I was literally flying solo with a baby. We flew through Darwin, and I had to do a COVID test at the airport 24 hours before my flight. We left two-days after Christmas so I was quite stressed about getting COVID, and extending my airport time to ensure my results came in time, so I went to take the test the day before, which was a great idea. I had also booked the concierge help at London airport so I could have someone put my luggage on the trolley while I was holding Miller, and that was not such a great idea. I lined up to get their help and then they told me they couldn’t help with luggage. So don’t bother with that. I was expecting a lot of tears, from both of us, but there was actually very little.

Having his sleep bag was very helpful, but the bassinet cover was very unhelpful. I really struggled with the change table in the toilets - Miller was too long. I asked the hostess if there were any other options and she took me through to the premium economy that had a bigger change table and told me I was fine to use it whenever I needed. Always ask for help! I had nappies and change of clothes in ziplock bags so I could put the wet/dirty nappies back in there (great for poosplosions). I went just with a carry-on case and the carrier, but I wasn’t allowed to use the carrier on the flight, so he was mainly in my arms or the bassinet.

Ask the hosts and hostesses for help whilst they’re with you. When they give you food, ask them to open it, put your milk in the tea, get something from your bag, etc. and don’t let them leave until you have everything you need for the next few hours. Finally, unless your baby will use the bassinet, don’t book the front row. Trying to get the TV out of the chair-arm one-handed is impossible. Or if you do sit there, ask the hostess to get it out for you.

We flew as a family, with my husband Josh also, to spend a month in Newport Beach. We were expecting a tough flight but it was a nightmare and the longest 15 hours of my life. Particularly, the first leg. Jack was squished into the bassinet that was positioned under the toilet lights, so each time the lights changed, it alerted him. Neither Jack or Matilda slept at all. Having an overtired baby that took to biting my breast in frustration and a grumpy toddler was traumatising.

Our carry-on suitcase was filled with snacks, change of clothes, activity books and toys. We took an iPad for my 3 year old, she wasn't used to having her own computer but she was obsessed with it and didn't want to turn it off which caused the biggest tantrum of her life. We did not use it on the flight home and it was much easier to just use the plane’s built-in entertainment.

Planes cause poonamis! Something to do with the altitude. Take more nappies and wipes than you think you'll need, hand sanitiser and definitely a padded change mat to help make it a little more comfortable as the plane’s change table is rock hard. If you’re travelling with your partner, allocate time slots to allow each of you to rest. We did this on the way home too which helped a lot. In LA, I made a mistake with the pram. Because we were there a month I decided to hire a double pram there rather than taking our travel pram. I regret this. The double prams are enormous and are certainly not a simple flick to open like the BabyZen. Our Baby Bjorn Baby Carrier was a life saviour in the airport for Jack to fall asleep. That's Not My Kangaroo Travelling with a baby might feel intimidating at first, but it’s totally do-able and even enjoyable

How to Take Care of Your Mental Health These Holidays

The holiday season can be joyful, but also overwhelming. Especially when you're a new parent. Psychologist Caitlin Arthur gives us the tools to cope.

When naps are the new parties.