A Guide to Decorating for the Terrific Two’s

Share
Mini-makeover tips for the rooms of little kids who play hard and crash harder.

Let’s get real for a moment. Toddlers are maniacs. Babbling, lumbering tiny humans who lack all impulse control but also operate at full tilt ALL OF THE TIME. From the second they wake up to the moment they kick and scream themselves to sleep, they are unstoppable. As exhausting as it is just watching them, for parents it is equally as satisfying seeing those same tiny people develop and change each day like magic. You’ve heard it said many times over, but these early years are formative for their emotional development. Toddlers learn through play, imitation, and exploration. So naturally, that minimalist, pastel-hued nursery you designed for a newborn is no longer satisfying the needs of your slightly-grown-up little person. Time for a mini makeover?

Last month your toddler was sick for all things dinosaurs. You exhausted every prehistoric-themed book, ABC show, and toy, and by now even you can tell the difference between a Stegosaurus and a Spinosaurus. Well today apparently, dinosaurs are out, and Bluey is in according to that tiny dictator who rules over your life and bank account. Suffice to say you probably shouldn’t be investing in a hand-painted Bluey mural for your toddler’s room with passions this fickle and fleeting. Opt instead for a neutral colour scheme for the walls and infuse colour into the room with soft furnishings like a bed canopy, a rug, curtains, cushions, bunting and a duvet cover. Take your toddler’s art to the framer and hang them alongside one-off prints you’ve sourced on Instagram and Etsy. These are all things that can easily be updated as your little one grows and commits themselves wholly and unconditionally to horses, then superheros, and then the colour pink.

Unlike us adults who have programmed our brains to filter out extraneous information (like that mind-dumbing conversation being had at the next table at brunch), toddlers have very few inhibitory neurotransmitters, so their brains are constantly exploding with stimuli. This super attention is critical for learning, but it can also be incredibly distracting. Research says that having fewer toys generally leads to healthier play and deeper cognitive development. Make it easy for them to pack away all the superfluous toys while playing with something else with a low-lying shelving unit and baskets or felt bags that can keep toys organised but still accessible. Better yet, work on a rotating toy system, pulling out a new curation of toys each month, and then replacing them the next. 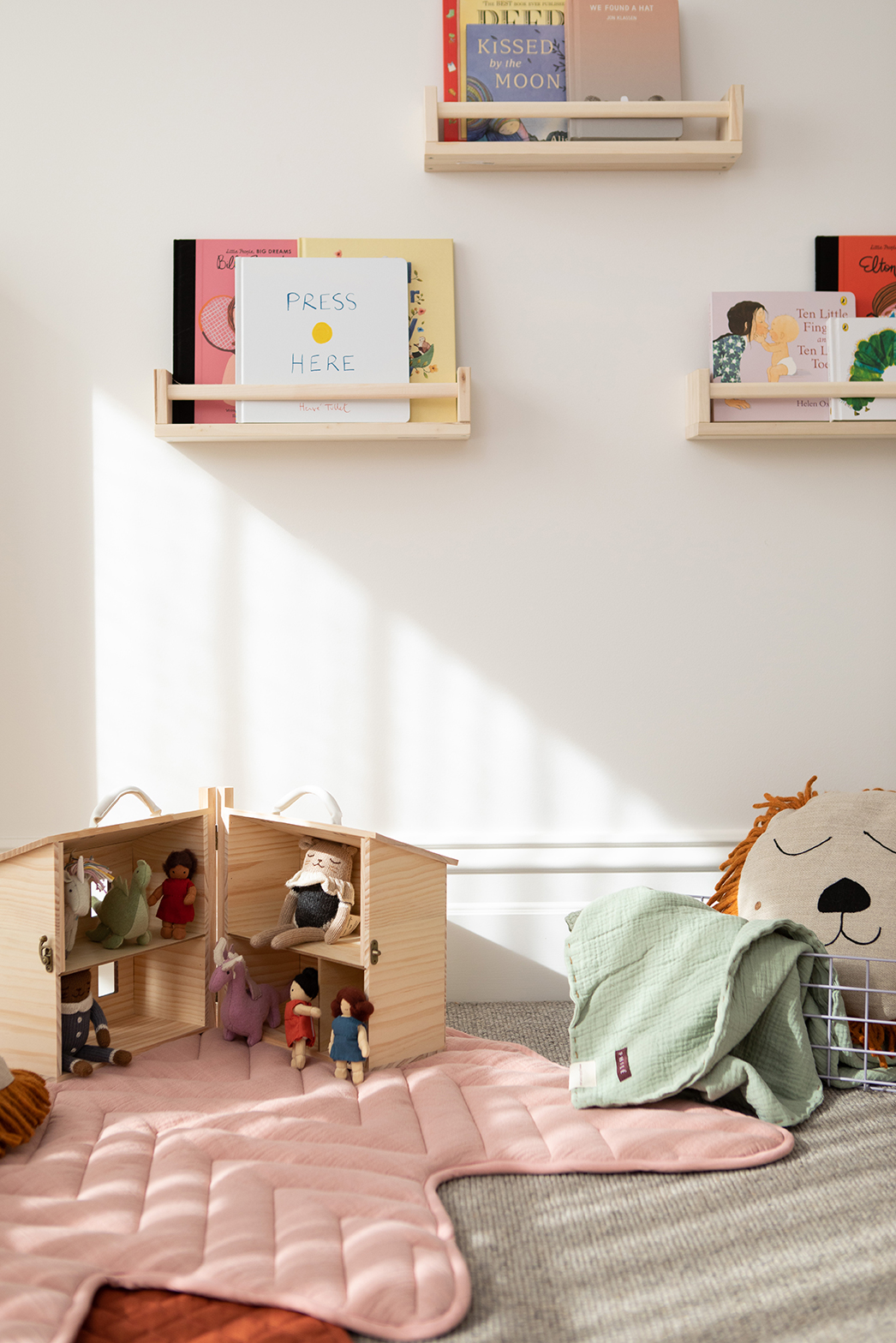 Add this to the list of topics you never heard about until after having kids, open-ended means toys that can be played with in multiple and varied ways. They are sometimes described as toys that are 90% child and 10% toy because of how much room they leave for a child’s input. A room full of toddlers could be given the same toy and every single one of them would find a different way to play with it based on their interests, developmental stage, natural abilities, and imagination. By this definition, the same toy can usually be played with by a baby, a toddler, a pre-schooler and even beyond. Not only is it better for your bank balance and cupboard space, but it’s also just so much better for your children, encouraging endless creativity and imagination. Some all-round favourites include magnetic tiles, play silks, animal figurines and building blocks. They can also just be things you collect around the house and recycle, like pinecones, gumnuts, toilet paper rolls, and ribbons.

One of the tricky things about creating a vivid, fun, and inspiring room for your toddler is that come sleep time, they will be so hyper stimulating it’ll take you hours to get them down (read: not a good thing for a parent itching to continue bingeing Euphoria). Try to create different areas within your toddler’s room that are designated for rest and reading, and another for imaginative play. In the play space, a blackboard could sit alongside an arts and craft table, costume box and a stack of puzzles. And in the dedicated rest area, a rug, floor pillows and a comfy chair positioned alongside an accessible rotating bookshelf will invite your said toddler to curl up with their favourite book when it all gets a bit much and they need a moment. The Baskets in Mustard They're stylists, they're shoppers, they're mums. They know.

Everything to Know About Hanging a Mobile in Your Nursery

Whimsical, beautiful and great distraction for when they’re losing it.

How to Do Colour, Calming, Gender-Neutral Kids’ Decor

Sage X Clare’s Phoebe Bell shares her advice for a space that's joyful and colourful but not in a toy-aisle way.