Snezana Wood on Pregnancy Sickness and Prepping For Baby No.4

Share
“Every pregnancy is different, so it’s best to play it by ear.”

This interview took place in late March, since then, Snezana and Sam have welcomed their baby girl, Harper.

Snezana Wood is in a unique position. She’s pregnant with her fourth child, but also back to the beginning in terms of baby gear. “We’re so unprepared, we haven’t got anything. We thought our last little one, Charlie, was our last baby, so we gave everything away. We truly are starting from scratch.”

While others might find this a little overwhelming, or annoying, Snezana sees it as an opportunity. “I’ve always kept things super simple. No bells or whistles with anything that I’ve used with the girls, it’s all been pretty old-school, but now I’m moving with the times and looking forward to using the new innovations and gadgets.” Even though Snezana’s last pregnancy was only three years ago, a lot has changed in the baby landscape. “I was at a girlfriend’s baby shower last week and there were so many things I didn’t know about or didn’t exist even when Charlie was born.” One baby tool she’s particularly keen to use? The SNOO. “I’m really excited about it. Everyone has been speaking about it and they all swear by it. Until now, I’ve had bassinets you can swing, but you have to swing it manually, which means waking up to rock them. All my little ones have liked being rocked to sleep and this means I have some extra help.” Here, Snezana talks through 10 things her fourth pregnancy has taught her, and how she and husband Sam, along with their three children, Eve, 17, Willow, 5, and Charlie, 2, are prepping for the new arrival.

“I’ve been feeling really horrible! I’ve been constantly nauseous, really fatigued and my body has just not been enjoying the pregnancy. I’m 30-weeks now and finally feeling better, but now the aches and pains are kicking in. One issue resolves and then something else takes its place, but I’m happy that I can finally get up and move about now. I’ve been sick with all my pregnancies, so I knew it would happen with this one, but I wasn’t expecting it to be worse and nothing has compared to how I’ve felt this time. I’m sure how I felt has also been impacted by being older. I’ve got 20 years on this pregnancy to my first. I was 24 when I had Evie, and I’m going to be 42 this year, so that makes a lot of difference. It’s been a lot harder on my body. I’ve also got little kids to run around after so I don’t have as much time to rest. It’s probably the combination of everything that’s made it so hard.”

2. You’re no good to anyone if you’re not good to yourself.

“I’m really bad at asking for help. I never do it, until this pregnancy, when Sam has offered, I’ve said yes. It’s something I had to learn and become OK with. Because I really needed it this time around. I’m thankful that Sam has a job where he can kind of pick up where I stop. He does a lot around the house, he helps a lot with the girls, and he knows how horrible I’ve felt so every chance I get, I rest and try not to feel guilty about it at all. Because I know if I don’t, I’m no good to anyone else. It’s taken me 17 years and 4 kids to learn it, so I know it’s hard, but it’s the best thing to do.”

3. Get your nutrients where you can.

“I was having lots of cravings in the beginning and I gave-in to nearly all of them. So I wasn't very conscious of what I was eating then. It was more, whatever was going to make me feel better, that’s what I was eating. Now that I am feeling better I’m trying to eat more nutritious food and the things I just couldn’t stomach before. I’m being as healthy as possible, but also, not being obsessed with it. I’m still eating my cheesecake and bread and all the things I’m craving, but trying to get the greens and protein in too. Things I couldn’t even think about a few weeks ago. I don’t mind roast veggies — I can’t do steamed, still. I have my greens in a smoothie, that’s easy. Meats, I’m still kind of off. Even just the smell of it cooking turns my stomach so a protein shake is better. You’ve just got to get it how you can.” 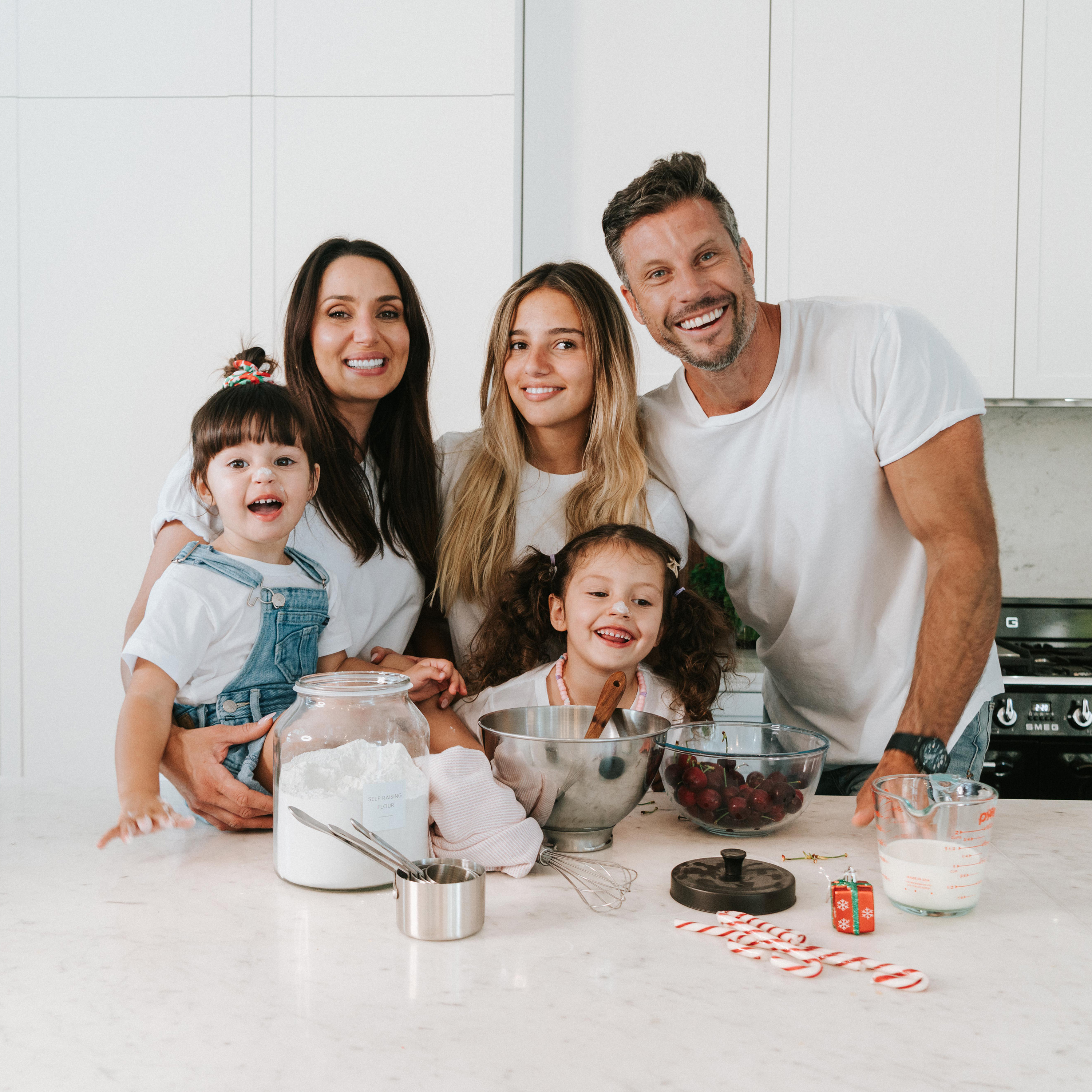 4. Foot massages for the win.

“I don’t have a heap of appointments or specialists in my pregnancies, but I’ve recently started to get leg and foot massages, because they’ve really started to bother me, and it helps alot. I just go to a remedial massage place that’s nearby and is easy to get in to. I get really badly swollen legs and feet with all my pregnancies. My feet don’t look like feet, my ankles are non-existent. Sam often posts pictures of my feet when I’m pregnant because I can’t describe how swollen I get. I look like I have elephantitis on my feet. The swelling should start kicking in anytime now. I’m just waiting for it.”

5. Labours are all different.

“All births were relatively quick, because I never really knew I was in labour until it’s really close to go time, because I’ve always had Braxton Hicks throughout my pregnancies. So when I actually go into labour, I think it has just started, but it turns out we’re at the end. So labour always feels quite quick, because once I’m in hospital it’s only a few hours until I have the baby. Charlie was the easiest birth because I had an epidural. With the first two I had no pain meds, nothing. Wow, that is an experience, having a baby without pain-killers. For Charlie, my doctor and Sam were both like, if you want to, have the epidural. So I planned to have it and it made it so much easier. It was a lot more relaxed and I got a lot more rest. The nurse just came in and said, ‘ok, time to start pushing’, and 12 minutes later she was here! This time I’ll definitely have an epidural again. I’m lucky to have had both experiences.”

6. In postpartum, walks are enough.

“I’m normally feeling pretty good postpartum, because my births have been quite straightforward. I’m usually not someone who needs a lot of sleep, but I’m good at taking it easy and listening to my body. Especially for the first 2 months, I think gentle walks are great. I also love getting out and going for a walk postpartum. Just to get some vitamin D, some fresh air and outdoor time.”

7. Lean on your village.

“I’m not great at boundaries, but Sam is. He’s good at being a gatekeeper when people are wanting to see us and the baby, but I’m exhausted. I’ll always say ‘sure it’s fine’, but Sam is much better at saying no. So I leave that to him. I’m hoping my mum will be able to fly over and stay with us and help out with the girls when I go into labour so Sam and I can be at the hospital. She’s come for all the girls, so fingers crossed the borders stay open and she can come.”

8. Play to your parenting strengths.

“Sam is amazing. He really does so much with the girls, and me being pregnant and not well again, he’s just gone next level. At night, we do dinner, bath or shower, and then I hand them all over to Sam, and he does the book and bed. They don’t listen to me, for me, Willow is out of bed and messing around for an hour, but for Sam, they’re asleep in two seconds. Not sure what I’m doing wrong, but I handball it to Sam now. And you know, he’s really bad at dishes, so I do the dishes, he does the kids.”

“When we’re bathing the little ones, we pop the baby bath on a bench top because bending down to the bathtub is so hard on your back. I always have a thermometer too (I’ve got the little crocodile), because I’m really bad at gauging temperature. I have my own showers super hot. Sam will jump in the shower after me and be like, ‘Jesus! What are you doing!’.”

10. Flexibility is a mother’s best quality.

“I’ve really learnt that each pregnancy is different and each baby is different, so it’s best to play-it-by-ear. I’ve learnt that you can’t just do the same thing with every kid because they are all so different and what works with one won’t always work, so don’t try to do everything the same. Just be flexible and go with it.” What You Actually Need to Dress a Newborn

This time, I’m enjoying the chance to decorate and organise a nursery properly.